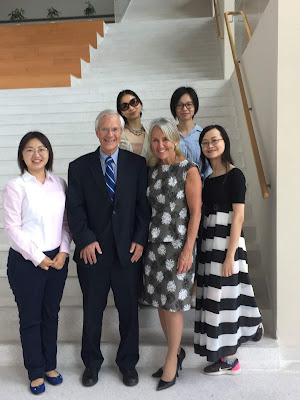 Superior Court Judge Cort Corsones and VBA Executive Director Teri Corsones recently gave a lecture at the University of Peking School of Transnational Law (STL) in Shenzhen, China. Entitled “The Role of the Bench and the Bar in Preserving the Rule of Law”, the lecture was followed by a Q and A with students at the only law school in the world that offers a combined American-style Juris Doctor degree and a China Law Juris Master’s degree.
The lecture opportunity came about when Judge Geoffrey Crawford introduced Teri to two students from STL who interned with Judge Crawford in the Fall of 2017. Teri invited the two students, Zheng Xinjia and Zhang Xi, to various VBA activities such as the VBA Annual Meeting and Justice Fest events. (They also enjoyed recreational activities, learning to play miniature golf for the first time!)  While touring with the students, Teri mentioned that she and her husband were planning to visit law school friends who were living and working in Hong Kong. It turned out that STL is just an hour south of Hong Kong, and the invitation to lecture was extended.
The lecture focused on basics of the rule of law in the United States, including core concepts in the U.S. Constitution. It also addressed how the bench and the bar work together to encourage access to justice, particularly for low-income litigants. The students in attendance had many questions about the topics covered, including Constitutional protections, differences between federal and state court jurisdiction, technology in the courts, and the concept of pro bono legal services.
Interesting information about law studies in China was also shared: law school studies in China are a relatively recent phenomenon, triggered by China’s transition to more of a market economy, and encouraged by many in Chinese government leadership positions who have law backgrounds. The program at STL is a four-year program, with classes taught in four quarters, with a week of exams after each quarter and six weeks off during the summer. 40% of the students study abroad during their four years, usually for a semester. The pass rate for the Chinese bar exam is only 10%.
Two new law students who will be interning with Judge Crawford in the Fall of 2018, Chenying Liu and Lu Aobo attended the lecture. They look forward to seeing Judge Corsones in action in Vermont courts, and participating in VBA activities when they arrive in the Green Mountain State in September.
Category: BlogBy Jennifer Emens-ButlerJune 19, 2018