You are here:
For the first time in its 125-year existence, the Uniform Law Commission is holding its annual meeting in Vermont, which commenced in Stowe on July 8, 2016.  The ULC, comprises more than 350 practicing lawyers, governmental lawyers, judges, law professors, and lawyer-legislators from every state, the District of Columbia, Puerto Rico and the U.S. Virgin Islands.  Commissioners are appointed by their states to draft and promote enactment of uniform laws that are designed to solve problems common to all the states.  For context, the ULC is primarily responsible for laws that have been adopted by states nationwide, such as the Uniform Commercial Code, the Uniform Partnership Act and the Uniform Interstate Family Support Act.
As expected, Vermont lawyers were gracious hosts.  Chief Justice Paul Reiber gave opening remarks to kick-off the several-day event. Our Richard Cassidy, who is the current president of the ULC, eloquently delivered his President’s Address.  In true Vermont fashion, Commissioner Peter Langrock gave each and every commissioner a jug of Vermont maple syrup from trees tapped on his property. Understanding the significance of hosting this national law group of attorneys, the Vermont Bar Association sponsored the event, in part, with Executive Director, Teri Corsones attending the opening ceremony as a guest.  Check out the pictures from the event, below.
There are nearly 500 people in attendance at the event.  The meeting is indeed a working meeting for the Commissioners who are tackling 6 new uniform acts or amendments: The Uniform Employee and Student Online Privacy Protection Act, the Uniform Family Law Arbitration Act, the Revised Uniform Unclaimed Property Act, the Uniform Unsworn Domestic Declarations Act, the Uniform Wage Garnishment Act and the Amendment to the Revised Uniform Law on Notarial Acts.  As these Acts move toward final approval, the Commissioners will also be tackling drafts related to non-parental rights to custody and visitation, uniform parentage, the regulation of virtual currency businesses and criminal records accuracy.
Thanks to Vermont’s Commissioners for their tireless service: Richard T. Cassidy, Theodore C. Kramer, Peter F. Langrock, Carl H. Lisman, Luke Martland and Stephanie J. Willbanks.
With these amazing and talented attorneys, the beautiful Stowe setting and, of course, the parting gifts, including Peter Langrock’s syrup, hopefully Vermont will become a ULC favorite and will host again, at least this time sooner than the next appearance of Brigadoon. 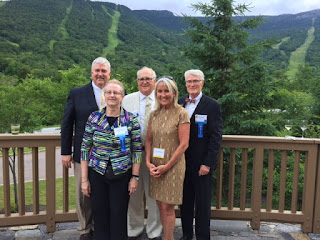 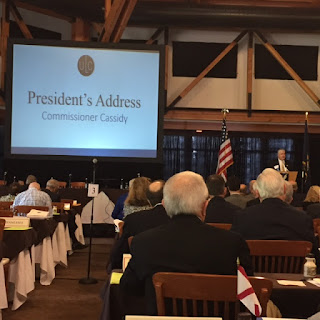 President Richard Cassidy addresses the ULC Commissioners (each seated with their syrups!) 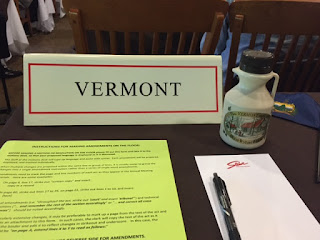 View from a Vermont commissioner table 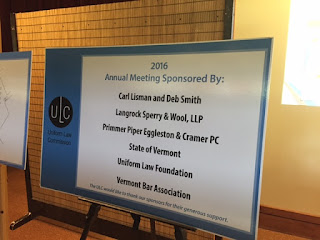