More than 90 attorneys gathered at Lake Morey in Fairlee on September 30 for a day of mingling, learning (5 hours of CLE was available), and taking care of VBA business.  All this occurred under blue skies and autumn leaves as the Connecticut River valley showed its best side.  The lawyers were joined by the judiciary. (The judges were mostly down a long hall at the end of the historic building, known for its rabbit-warren configuration, but everybody got together for lunch and breaks).

Lunch included a productive business meeting.  While the chicken was regrettable (banquets, what can you do?), there was cake on every table before the first words were spoken, and a sunny, upbeat mood prevailed. The meeting was presided over by Bob Fletcher, the outgoing VBA Board President, whose skill set includes running excellent meetings.

Central to the agenda was a resolution on the client security fund. The topic was tabled at the mid-year meeting in Burlington in March.  After a brief discussion, the resolution passed without controversy.  It authorizes the Board to make expenditures from the fund for purposes consistent with the VBA mission, so long as a minimum balance of 1.2 million is maintained.

Bob moved on to receiving nominations from the floor for the attorney positions on the judicial nominating board.  For a list of the nominees and brief discussion of the process, see the follow-up October 11 memo from State Court Administrator Teri Corsones here.

It was then time for awards. Jim recognized fifteen VBA members who had reached emeritus status (75 years of age and 40 years as a licensed Vermont attorney and VBA member). Those who were present received certificates in person. The others have been mailed.

Bob then gave President’s Awards to Catherine Clark for her years of service to the Bar, particularly in arbitrating fee disputes, and to Teri Corsones, State Court Administrator and immediate past executive director of the Vermont Bar Association.

Maya Tsukazaki, the 2022-2024 Poverty Law Fellow, followed with some brief remarks about herself and the program, which is run by the Vermont Bar Foundation. A report on the VBF and an appeal for support followed from VBF Board Member Bonnie Badgewick and the new executive director of the VBF, Jose Herrera.

The Attorney General’s Lawyers Fighting Hunger campaign awards came next. They were presented by Assistant AG and VBA Board Member Joshua Diamond, with comments from Acting AG Suzanne Young.  The Hon. Amy Davenport (Ret.), a member of the board of the Vermont Foodbank, then outlined the need for food support in Vermont and the impact of the donations from this year’s drive.  The Paralegal Association won most items donated and most money raised, for non law firms. For law firms, DRM won most items and most money.

As his last act as VBA President, Bob then transferred the gavel to incoming President Andrew Manitsky. Andrew regaled the crowd with a brief history of his family and his modus operandi for getting things done. His plans for the year ahead include improving access to justice issues and making trial court decisions available online.

After lunch it was back to learning. The CLE programs that day included a discussion of the future of remote hearings with Judges Toor and Tomasi and Scott Griffith, Chief of the Planning and Court Services Division. Juvenile Law Section Chair Sarah Star led a well-attended session on Reproductive Justice in Juvenile and Family Proceedings. Legal Tech presentations (what to get, how to use it safely) were offered by Jared Correia in one session and Jim Knapp and Mike Kennedy in another. A new initiative to assist asylum seekers was discussed during a panel led by Immigration Law Section Chair Sidney Collier.  Other members of the panel included Brett Stokes, Kate Parrlberg-Kvam, and Rebecca Wasserman.

The last CLE of the day was an hour of ethics with our own Bar Counsel, Mike Kennedy.

The annual meeting wasn’t actually over as attendees headed out into the late afternoon sunshine on Sept. 30. It continued with eight bespoke webinars and two days of basic skills courses that were held the following week.  A list of all those presentations is available on the CLE calendar at the VBA website.  Recordings of the Lake Morey CLEs and of the webinars that followed are available in the VBA digital library.

Of course, the entire meeting, both in-person and virtually, could not have been possible without our generous sponsors.  This year we had as Gold Sponsors: CosmoLex; Pinnacle Financial; Smart Start, LLC; Vermont Landlords Association. Our other sponsors were: ALPS and First American Exchange Company. and CATIC.

All of us here at the VBA appreciate the loyalty, generosity and positive spirit of our sponsors, our attendees and our presenters, who made our hybrid VBA Annual Meeting a great success!  Here is some of what it looked like: 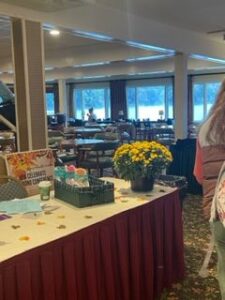 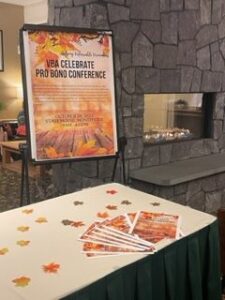 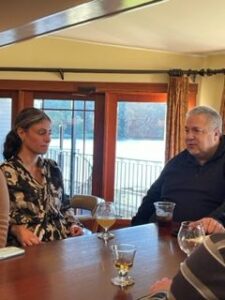 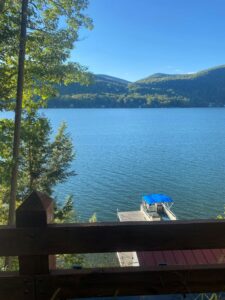 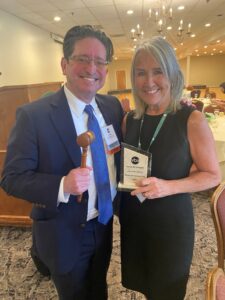 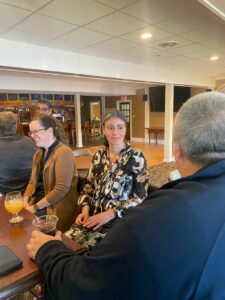 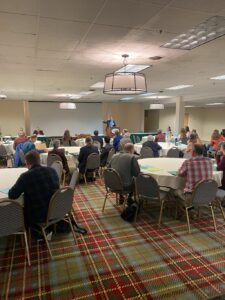 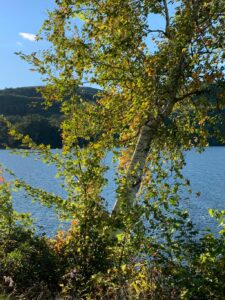 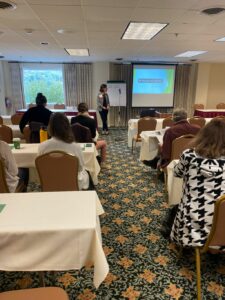 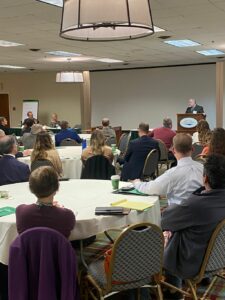 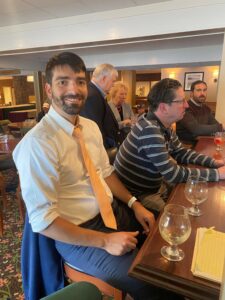 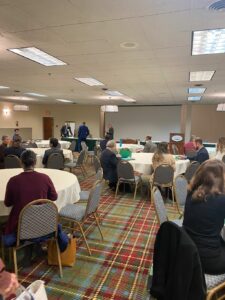 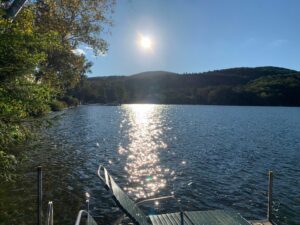 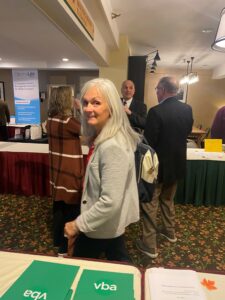 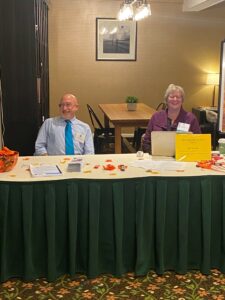 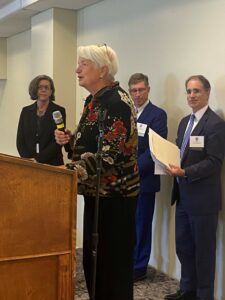 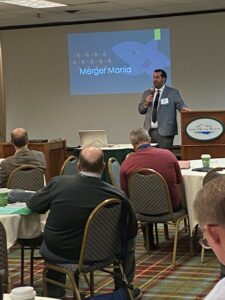 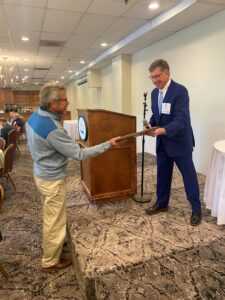 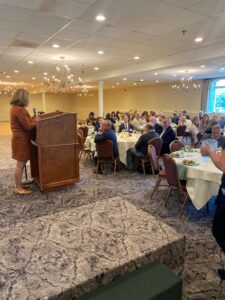 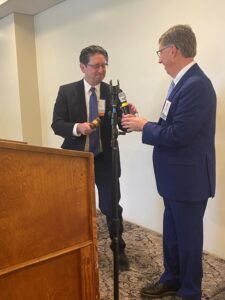