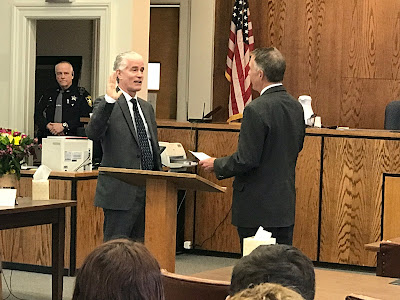 Guests from near and far braved the snow storm and packed the Washington County Courthouse yesterday for the swearing-in ceremony for Scot Kline.  Governor Phil Scott kicked off the ceremony by recounting Scot Kline’s long history with the State, in AG and General Counsel positions.  The Governor joked that he had to appoint Kline because he was running out of agencies to put him in!
Before administering the oath, Governor Scott recounted his 4 C’s in selecting judges: character, competence, commitment and chemistry. He noted that it would not be easy to see Scot Kline leave his branch of government for another.  He found Kline to be thorough, balanced and dependable and remarked that he was committed to his family, an outdoorsman and an athlete.
Former Attorney General Bill Sorrell next spoke and promised to be brief.  Sorrell reminisced about his lectures in China about western legal thought noting how much emphasis was placed upon our US Constitution as the bedrock of the system.  He noted that although he is now an ‘executive branch guy’ and comes from family in the legislative branch, he believes that our system depends most on an independent, competent judiciary as the fundamental interpreter of law. Sorrell actually turned to the Governor when he stated that the judiciary, in certain respects, is the highest branch of government! Speaking about Judge Kline, he praised Kline’s integrity, competence, sense of humor and ability to empathize.  Sorrell stated that he recommended Kline knowing that he would be a fantastic judge, remarking about how he has hired him three times already.
The final speaker on Judge Kline’s behalf was DFR Commissioner Michael Pieciak, Kline’s most recent boss.  Pieciak joked that he originally was going to start with praising Kline for how he never makes mistakes, but that he could no longer do so since Judge Kline stumbled on a few lines during the recitation of the oath! But in all seriousness, he remarked that Judge Kline’s competency was off the charts, recalling at how quickly he understood complex material.  Kline was also praised for being a great leader and mentor when the DFR needed it most upon hiring him. Pieciak also noted that Kline sets an excellent example at being devoted to his family and to the public.  Finally, in an effort to embarrass Kline for his countless accolades, Pieciak noted that Scot Kline obtained the #1 score in the Ohio CPA exam when he took it.  Pieciak wished him luck and stated that he will miss a great friend in the office.
Judge Kline gave his round of thanks to all those present, including his wife, Vicki Brown, his three sons, 2 of whom were present, and his in-laws, who lived next store to them for 20 years, as the two families became 4 parents raising 6 kids.  He congratulated his wife on being appointed interim CEO of Vermont Electrical Cooperative.  Judge Kline remarked about how he has worked with so many incredibly talented people over the years that help to mold and shape him, joking that if he were to flop, they’d be responsible for that too!  He promised to defend and support the values and promises set forth in the Constitution, to do equal right and justice and to make litigants feel like they are treated respectfully and fairly.  He stated that time will tell how successful he will be but that he is fully committed to doing the best that he can.
Please enjoy pictures from the event, below. 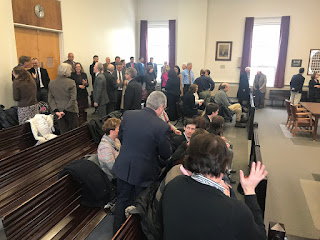 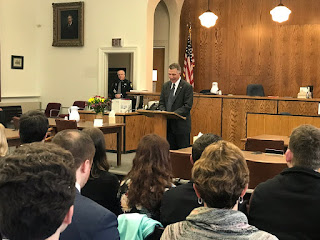 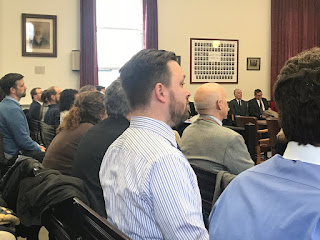 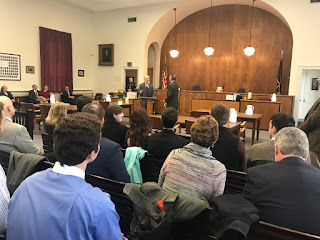 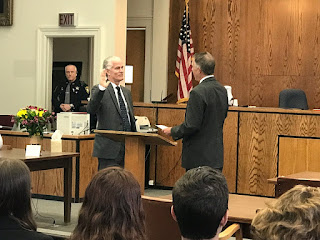 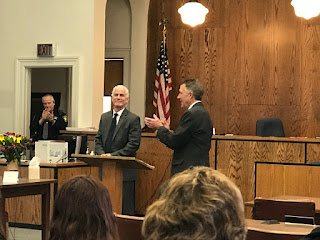 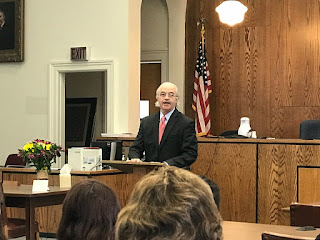 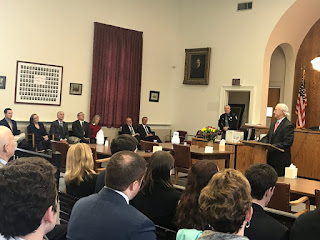 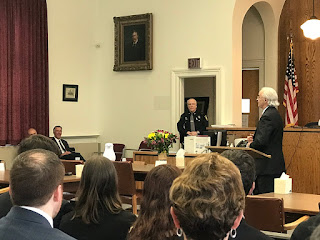 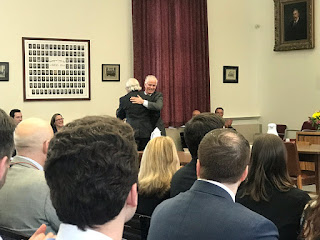 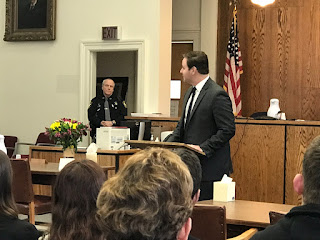 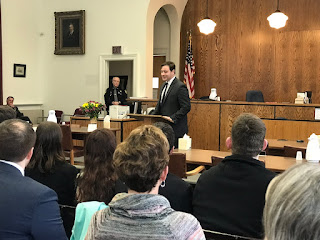 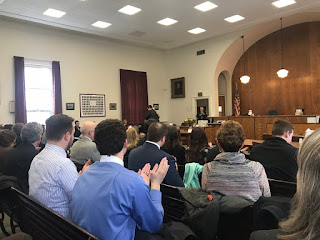 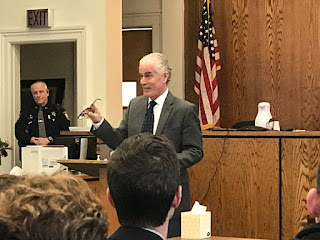 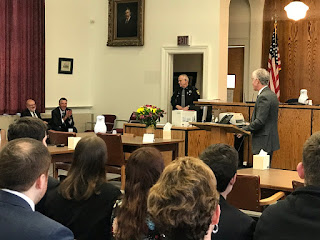 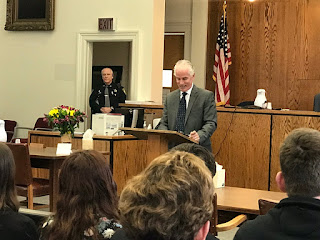 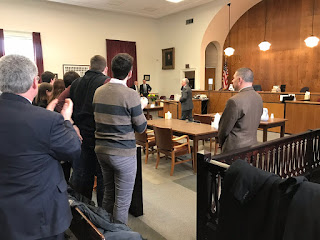 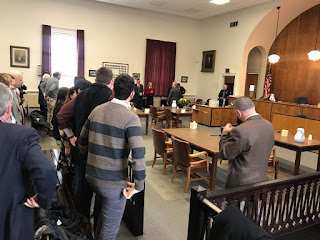 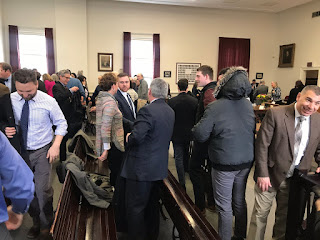 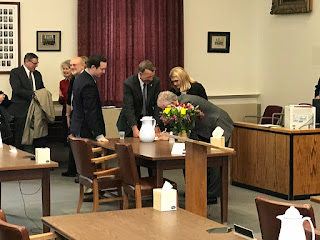 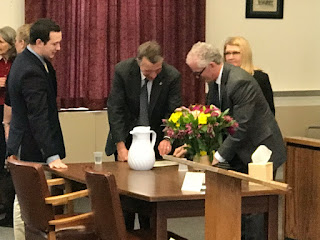 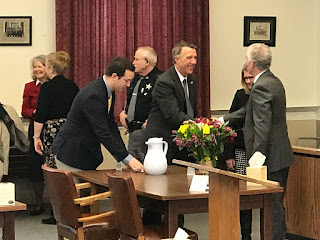 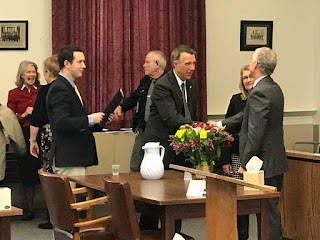 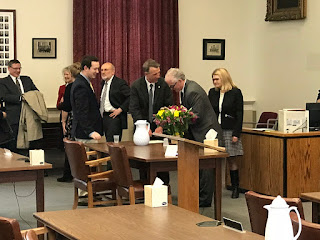 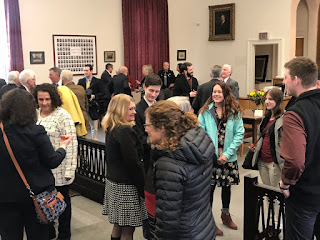 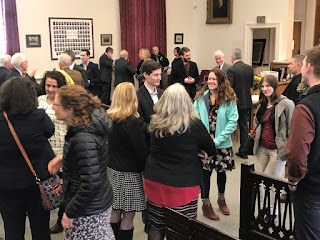 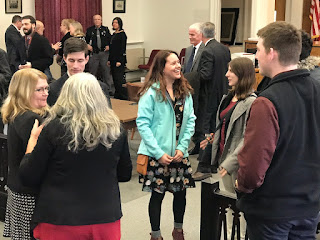 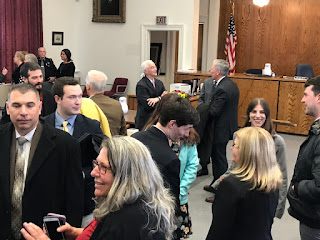 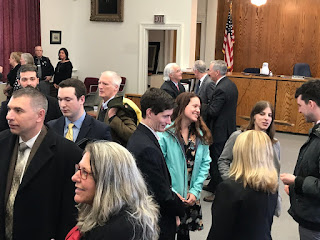